From Protospace Wiki
Jump to navigation Jump to search

To investigate various methods of growing food for personal use and the possibility of industrial use. We aim to collect data and share with other groups to further the collective knowledge on the subject. As the project progresses, no doubt the scope will change.

Hopefully we will be able to come up with some best practices and schematics so anyone who wants to can make their own system. 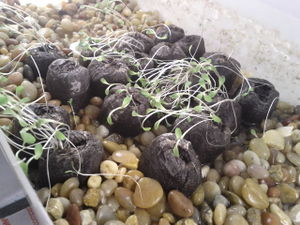 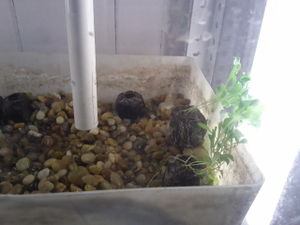 It was mentioned that we look at city resources, such as the Bird Sanctuary and the Fish Hatchery.

A group of members within Protospace has expressed high interest in designing, constructing and operating an aquaponics project within the current space.

The term aquaponics is used to describe an integrated system of fish and plants in a symbiotic relationship; one provides the other with the required nutrients while removing toxins which are detrimental to the survival of the other. It is a relatively new science with provincial research projects exploring this avenue of natural science with food sustainability in mind. Further information is available on our wiki at http://wiki.protospace.ca/index.php/Hydroponics.

There are some points of note we must consider in installing and operating such a system.

The most immediate and obvious risk is water/flood damage. The current equipment has a capacity of 160L of water; it has not been filled pending an approval from CPAA to “go ahead”. We have considered the placement of the system with this in mind, with a desire to locate the equipment away from internal doors/corridors and internal common walls. We have also considered acquiring absorbent materials used in construction sites around drainage systems which would adequately cover any minor spills or major leaks. Mike has found Rubbermaid storage containers in excess of 160L capacities which will adequately cover the worst case scenario, that is, a total system failure. Though a simple and seemingly low tech solution, this will address the concerns of flooding and leakage.

As this project is a research and development initiative, close monitoring of the system will occur frequently with on-site visits from the project members at least once every week. We will be posting emergency contact information in the event none of the project members are at the space.

There has been discussion regarding mold/pest infestation as a result of operating a biological system within an enclosed area. It is our opinion that a series of best practices should be adopted to mitigate such concerns, namely:

Mike has also heard feedback/concerns regarding energy usage of the system; a highly aggressive daily estimate is 3.27$. (a detailed chart is available in the soft-copy of the proposal)

We anticipate the costs to be significantly lower (around $1.50 per day); research is on-going into lighting systems but we have solid information pointing towards 100 watt units (down from the estimated 400 watt units). Should costs be a concern we are very eager to discuss an adequate compensation plan to ensure the system’s operation does not negatively impact the use of the space by other Protospace members or cause added concern for CPAA.

Significant research exists in this area of science, most notably a project run via the provincial government at two facilities in Brooks and Lethbridge. Though we have not yet successfully made contct with the team members from those projects, efforts continue to discuss our endeavors and ask a variety of questions to aid in our project.

We are very cognizant of the space we have been graciously permitted to use and wish to maintain the existing relationship between CPAA and Protospace. As a long term goal we wish to see potential interactivity between this project and the CPAA’s clients; what format that would take is unknown at this time. With this in mind we welcome any and all opportunities to discuss concerns, ideas or suggestions with the CPAA and other Protospace members. Further details are available on our wiki at http://wiki.protospace.ca/index.php/Hydroponics which is regularly updated by team members.